Geeks of all fandoms and walks of life satisfy their passions by obtaining material goods. But what happens when old flames fade or when ten years of collecting catches up to you?

It can be very hard for a geek to say goodbye to old treasures and it’s unthinkable to just haul it to the curb or to blindly donate it. Once my anime club donated some manga in a book drive for the U.S. troops in Iraq but what are the odds of a Japanese copy of Revolutionary Girl Utena winding up in the hands of someone who appreciates it?

The answer is: hold a swap meet specifically for fandom goods. Some conventions such as Fanime and Comic-Con address their attendeesâ€™ plights of needing to clear their collections and set up times and spaces dedicated to fans selling, buying, and bartering various treasures.Â  But why wait for those specific times?

Thusly, my friends Feuresonne and Yoshikochan decided to hold an anime swap meet last weekend and invited their friends to participate. The rules were simple: buy and sell to your heart’s content! There were no buyers fees or permits needed so it really was as easy as showing up to Yoshikochan’s house and setting up shop or browsing other people’s goods. The majority of people were selling anime and manga goods but there were also cosplay items, clothing, and baked goods for sale as well.

Feuresonne! Dressed as Nel from Bleach. Quite a few people dressed up for the event too. I was too tired to do so but I admire everyone else for looking so awesome. My friend Kat was smart and had her prices all marked while people like me were still scrambling to figure out and write down prices on post-its. My friend Rapt0rx was a genius and brought one of those portable canopy things with her to protect her and Feuresonne from the merciless sun. If anyone needs Bleach 1-24, she’s got ’em! I hung out with this group of geek girls (L->R: Murada, Kat II, Mangaka-chan, and Onelani)  and we put all our stuff together. They are all adorable. Whomever brought these homemade cupcakes to share with everyone, I LOVE YOU. *A* Admyr with a shitload of VHS tapes that the USC anime club dumped on him while he was president. He kept asking me to pay him money to watch him eat one of the tapes but I declined. Yoshikochan‘s dog Pluto decided to sleep on top of some CLAMP magazines that I had. There were a lot more sellers around the yard and inside of Yoshikochan’s house but you get the idea. :)

People had mixed stories of success or coming away from the swap meet with more than they came with. A big factor was that there were more sellers than buyers but everyone still had a great time overall! I had to step out for a few hours to do another job in the middle and I was sorely tempted to just stay and hang out with everyone and eat ice cream. I managed to get rid of a decent amount of things so I’m pretty happy even though I was running on three hours of sleep.

Swap meets and yard sales can be pretty stressful events but it can be really fun with people who share the same interests. Hopefully this isn’t a one-time thing because it’s a lot of fun to just get together and poke through friends’ thing, isn’t it? 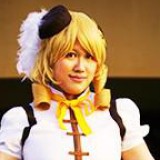