The Majestic Party Tiger transformation. Chubby Bunny at Comic Con. Well, the tiger head was actually a backpack. And it got a lot of attention–some good, some bad, haha.

GEEK & SUNDRY, THURSDAY, JULY 24 AKA: BEST OF THE BEST 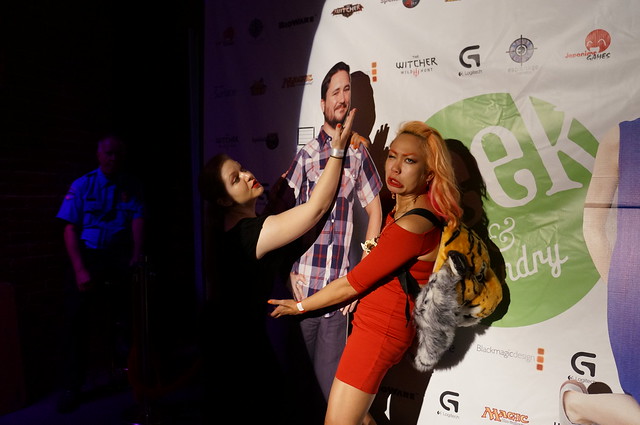 Bar none, this party was the chillest, funnest, danciest, IDGAF-est soiree of the weekend. We all attended other events that may have been more scenic, lavish, or large, but this one took the cake for “PARTY THAT ACTUALLY WOULD LIKE GEEK FANS TO COME AND HANG OUT AND THEN GAVE THEM A HELL OF A GOOD TIME.” …if there were such an award, that is. Unlike other celeb-hosted fetes at Comic Con, Felicia Day and her posse actually stuck around to dance and hang out with their guests. The disappointing part about most of the SDCC Celeb-hosted events, is that those people are usually paid to appear for a minimum amount of time, like a half an hour or something, and then usually duck and escape as soon as their obligation is fulfilled. (Fun facts about Hollywood! It’s all a ruse! They’d rather not be surrounded by hoards of frothing-at-the-mouth fangirls, who knew? haha!) 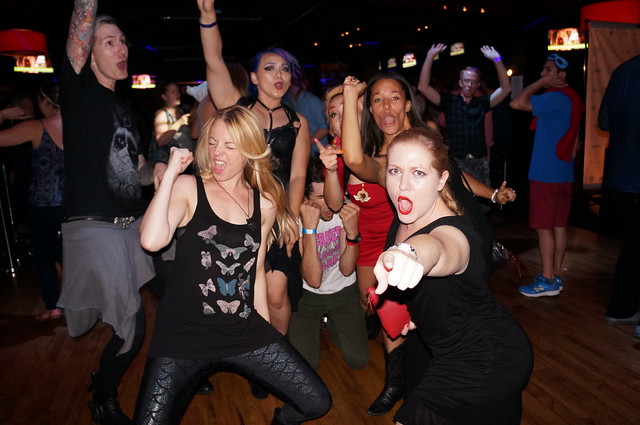 This is our posse. WE PARTY HARDDDD. Check Gizzy B in the front, condemning you to a lifetime of partying. BEHOLD THE PARTY TIGERS.

BUT! Rather than treating their fans as drooling masses that must only be put up with for the sake of viewership and sales numbers, Geek & Sundry really rolled out the red carpet for their homies with a seriously wicked DJ, big dance floor, and fun photo ops. We danced so hard I think I broke my shoes that night. Fun fact: I felt someone pulling on my tiger-shaped backpack and I whipped around to see who it was… and it was Felicia Day grinning and dancing around to tell me she liked it, haha. YOU’RE SO CUTE FELICIA. NEVER CHANGE.

CONS: My god, that line for the bar! The bartenders were a bit slow, and clumsy, and I think there were only 4 of them for the hundreds of people who were piled up against the bar. Eek!

Hosted by the LA Times at the rooftop at the Hotel Salomar, the Hero Complex party was a fun fan event open to the public for those who were able to RSVP or had the patience to hop in line. Featuring drinks and fancy views, they had lots of Star Trek fans in attendance, and even hosted a giveaway from the novel “Redshirts” by John Scalz (that Yume Ninja won!). The photobooth there turned your images into a mini flip book, too! There was also a raffle to win lunch with Joe Quesada or Dan Jurgens.

CONS: Even if you were on the list for this event, it was a wait to get in. We heard a lot of complaints from other attendees that when they were finally let in, the venue was super empty looking still. Hmmm. The old line game. Also, besides the photobooth, there wasn’ t much to do but sit and people watch since there was no dance floor nor performances.

IGN & SIN CITY 2,THURSDAY, JULY 24 AKA: WE LIKE DANCING LADIES

Suicide Girls dancing up a storm

Let me preface by saying, we were not actually personally invited to the IGN/Sin City 2 Party. I came in as my fiancee’s plus 1, since HE was actually invited as a member of FOX studios, haha. (I’d hate for any of you to think important peeps actually care if we’re at their parties or not. IT’S ALL A RUSE!) Hosted at the Hard Rock FLOAT space, there were several open bars, lots of projections of the movie trailer, photo booths with cute printouts, and passed trays of food that we lay in wait for like starving lions in the Savannah. The party was very Hollywood, with a lot of fancy looking dudes and dames claiming the reserved tables around the bar, but this I easily ignored.. for the party was really about two things: 1) Michael Rooker wandering around the party, security guard-free and chatted with anyone who would talk to him (and then I embarrassingly told him I SORT OF LOVE HIM then ran away like a freak. UGH! Please, future Michelle, prevent yourself from talking to celebrities you actually like ever again, please), and 2) the AMAZING Suicide Girls who provided entertainment on the main stage, performing multiple burlesque dance acts for the crowd. WELL DONE to them, seriously.

PROS: Suicide Girls dancing up a storm, large pretty venue, and Michael Rooker. (I’m SURE the actual cast showed up at some point to this event but WE HAD TO GO FIND OUR FRIENDS and peaced out early.)

CONS: The entire Defective Geeks crew couldn’t ACTUALLY go to/get into this, despite having a VIEW OF THE PARTY from our hotel room window haha. The event got sort of boring once performances were done, so we bailed and met up with the rest of the girls at Geek & Sundry right after, haha.

SLAMCON, SATURDAYJULY 25 AKA: WE STILL LOVE SAM FROM SUPERNATURAL, OKAY??? 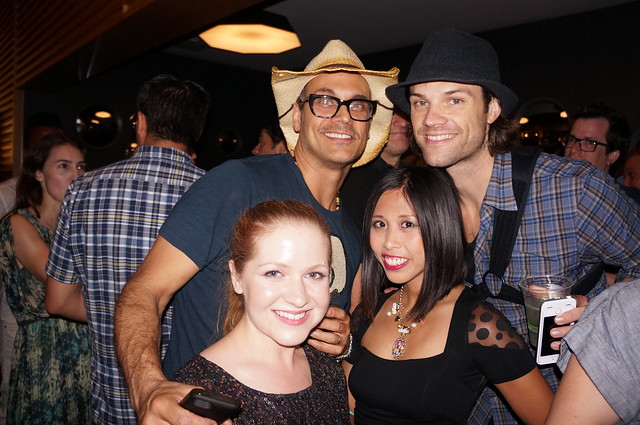 We didn’t expect anything great from this night, but then I started getting texts from SpacePirateQueen and Gizzy B that THEY TOOK PHOTOS WITH SAM and my only response to them was, “YOU ARE ALL DEAD TO ME.” I hopped in a pedicab immediately and met them there… BUT THE PHOTO OP WAS GONE. SAM WAS BUSY WITH HIS COOL FRIENDS AND I FELT WEIRD AND HUNKERED IN A CORNER STARING AT HIM LIKE GOLLUM. My preciousss.

Recap from SPQ/Dianne: Hi all, SPQ here jumping in to do my little recap of Slam Con! Slam Con is a Comic-Con tradition, hosted by two of my favorite SDCC people, Todd Stashwick and Dennis Calero. What makes Slam Con fun is that they don’t reveal the location until the day of the party via Twitter, which makes it a little mysterious and intimate for fans and for the people who go every year. Thankfully, I had a good nap on this day and had dragged a half-dead Gizzy B with me out of our hotel room to “stop by” the party. Not only did we end up staying until the bar closed – we saw a lot of our friends there, met a couple of cool girls, and  ended up getting a photo with Jared Padalecki (if you didn’t notice Michelle’s ALL CAPS account above…) and had a great last night to SDCC. Misha Collins (Castiel) was also there but we just watched a super-adorable-fan cry tears all over him. Makes my heart grow a little bigger. Next year, don’t forget to follow @Slam_Con and join us! ;)

PROS: It’s another party for the fans where everyone is relaxed, there to meet and talk and just have a good time hanging out. Todd and Dennis are one of the kindest people you’ll find at this convention.

CONS: Saturday night = everyone is half dead. That’s not the party’s fault though.

I would like to point out we rounded out this night by playing NEVER HAVE I EVER in the corner and having the best goddamn night.   Let me end this post by saying, HOLY CRAP we had a great time, but we are not the young bucks we once were, which left us in a state of gooey flesh puddles by Sunday morning. Should you wish to pursue this sort of schedule next year at SDCC, we only warn you to TAKE NAPS DUDES. TAKE AS MANY NAPS AS YOU CAN. And then you too can transform… into the glorious PARTY TIGER.

The tattered remains of our party schedule for ComicCon HAHA.

INTERVIEW: Tommie-Amber Pirie, Witching It Up on BITTEN