This year we were lucky enough to conduct a video interview with Dennis Calero and Todd Stashwick, the creative team responsible for the awesome web comic/graphic novel The Devil Inside. The bad news is that our audio committed suicide half way through the video interview. OH NOEZ!

Yes, we are very professional and you should let us interview you.

Luckily my brain is ever so slightly larger than the size of a walnut, so I remember a lot of what they said during the interview that you may not be able to make out from the audio.

Here is some supplemental content to the video interview (Author’s Note: This is a summary and is not word for word what Dennis and Todd said):

How have the characters evolved over time?

He started off as a man with an idea of who he wants to be, and over time he has grown more of a conscience. Also he is not what you typically picture when you think of “the Devil”. He does not have a red cape with a pitchfork and it is not necessarily his intention to bring the evil out of others, despite the fact that it happens. In this story it is more humanity that causes the problems than the Devil, so it’s the evil of others that surrounds him more than the evil of being the Devil. In fact, its also a Pinnocchio story. He over time wants to become a “real boy”, or in this case more like a human being. On the back of the book it even says, “Evil is not a force, it is a choice.” He, the Devil, wants and has that choice to not be evil anymore.

If you could put your characters in any other fictional universe which one would you pick?

We’d want him to hang out with the Peanuts Gang, and in fact in a way we already did that. We did a Devil Inside Great Pumpkin episode in the visual style of the Peanuts cartoon. 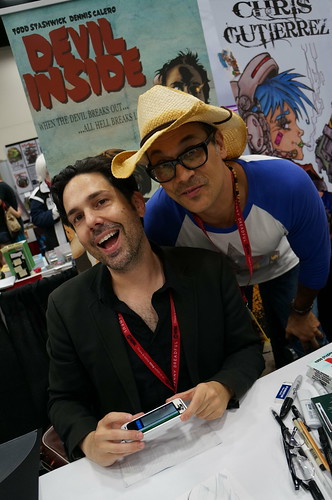 Clearly you guys planned ahead and knew I was going to ask that question.

Totally, we took care of it.

Where can we read the comic online?

You can go to ToddStashwick.com where there is a new panel posted every week. We sell the graphic novel, the compilation of the panels over the course of the year, every year at San Diego Comic Con (and you can buy the graphic novels online too).

Where can we find you guys online?

Please make sure to check out The Devil Inside at ToddStashwick.com and to follow both of them on their respective twitter accounts. Stashwick and Calero are an incredible creative team with an awesome story and are nice enough to put up with Dianne and I fangirling over them every year at Comic Con. We seriously love them and hope that you check them out.