As a rabid Jane-ite, one who considers themselves an expert in all things Jane Austen, I was pleased as a Regency spiked punch to be able to attend the Jane Austen Evening this year, which is held annually at the Pasadena Masonic Lodge by the Society for Manners and Merriment.

The event consistently sells out within minutes online, with lucky patrons being able to choose between just the dance ticket, or combining it with a sit down tea service beforehand. Although the demand for tickets continues to grow, the Society for Manners and Merriment insists on keeping the venue and the size that it is, to ensure a unique, intimate, and carefully crafted event for its patrons.
If you are curious about this event, but wonder what to wear, worry not! Even though there is often a plethora of beautiful regency garments worn by attendees, the ball also welcomes those without timeline appropriate attire to simply wear formal dress clothes.
Step into the world of Jane Austen, and check out some of the beautiful garments, dances, and decor of this wonderful event!

Even more photos of the cuteness below!

END_OF_DOCUMENT_TOKEN_TO_BE_REPLACED

Defective Geeks has survived (kind of, sort of?) another year of random geek shenanigans and once again, I wanted to highlight some of our accomplishments. This year was a bit more mellow than 2013 was but we got to experiment with bringing new content to the website with the help of friends. I would like to thank everyone who has stopped by to read a blog, watch a video or simply stumbled upon a photo on a post that they really liked (I see those tweets go out!).

For the people who have always supported us, especially those who remind us all the time that we are loved… THANK YOU!

Now let’s get on with our year in review.

END_OF_DOCUMENT_TOKEN_TO_BE_REPLACED

For years I have wanted to go to the Jane Austen Bath Festival, and this year I finally got my wish. I coerced three of my friends to go with me and we had a fantastic time. 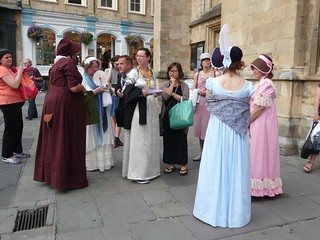 There were amazing costumes all weekend. It was super cool seeing them all wandering through town.

END_OF_DOCUMENT_TOKEN_TO_BE_REPLACED

It is a truth universally acknowledged that when your best friend gets engaged, you need to throw her an amazing bridal shower. When Michelle and I first met, we bonded over our love of all things geeky: otaku culture, cosplay, comic books, video games, and of course… Jane Austen.

Naturally, when Austenland came out last year, we watched it. And when I say “watched it”, I mean that there wasn’t a single weekend in this year where we both didn’t watch this movie together, or separately, and then quoted it back to each other.

When she asked me to be her Maid of Honor, I knew that the one thing I had to do was throw her a surprise Austenland themed bridal shower.

END_OF_DOCUMENT_TOKEN_TO_BE_REPLACED

The cast of Emma Approved joins us in this amazing and fun episode, with Joanna Sotomura (Emma Woodhouse), Brent Bailey (Alex Knightley), Dayeanne Hutton (Harriet Smith), James Brent Isaacs (Bobby Martin), Gabriel Voss (Ryan Weston)  and Mapuana Makia (Izzy Knightley). Listen to the actors talk about the show, their characters and us fangirling over Jane Austen with James Brent Isaacs. This episode was recorded at the Sideshow Network studios, special thanks to them! After the baths, we went to Sally Lunn’s and I had some tea plus really delicious food. They are popular for the Sally Lunn’s buns: giant, brioche bread that they use for everything, including their cream tea and sandwiches. The site that they operate in is also known as the oldest house in the city where they have excavated a cellar and preserved its old kitchen. END_OF_DOCUMENT_TOKEN_TO_BE_REPLACED END_OF_DOCUMENT_TOKEN_TO_BE_REPLACED

Our Lady DefectiveGeekers had a very Jane Austen weekend in England, stocking up on Mr. Darcy merchandise along the way. Space Pirate Queen and Pilbeam tell tales of Scotland and England adventures and talk about strange films they’ve watched in between sightseeing… like Earth Girls Are Easy.