The Lady Geeks discuss the implications of the movie, Aloha, which they somehow manage to segue the conversation to some Suicide Squad “spoilerific” news. We hand out another Ovaries Explosion Award and Fanfic Theatre makes a triumphant return.

HEY, LISTEN! Get ready for a one way ticket to Hyrule on the feels train, because 2 years in the making, The Zelda Project has just released their Live Action Zelda trailer!

Created by the team at The Zelda Project, this teaser was directed by Clinton Jones, with music by Wayne Strange of ZREO, and costumes by Sarah Quillian.

Check out the hunky Wes Johnson starring as Link, with Whitney Moore as the beautifully rendered Navi.

This teaser serves as a prequel to the live action Zelda “Final Battle” movie being produced this year, which will be directed by Tom Grey with music composed by Sonya Belousova, (both of the group Player Piano), based on the final battle between Link and Ganondorf depicted in Ocarina of Time. Some screen capped goodness below:

Sarah Quillian says, “..[T]his trailer was created with love and many weekends of free work from all over the world…. TZP has begun production on The Final Battle Film. Visit www.thezeldaproject.net for more info on the project, and subscribe to the YouTube channel “www.youtube.com/playerpiano” and “www.youtube.com/zeldaproject” for more videos!”

We’ll be rooting for the TZP team! GIVE US MORE MAGICAL HYRULE FEELS, PLEASE.

As you all know, we love Halloween and all our October podcast is usually focused on creeptastic news and stories. This episode was no exception — listen on to find out about the Space Pirate Queen’s most recent haunting story.

The Space Pirate Queen admits that she watched AND enjoyed the new Teenage Mutant Ninja Turtles cartoon and is now officially going to get kicked out of Nerd-dom. We also discuss the relationship between news and media — plus Pilbeam’s first time at a Ren Faire! Fanfic Theatre: Fast and Furious x Twilight. 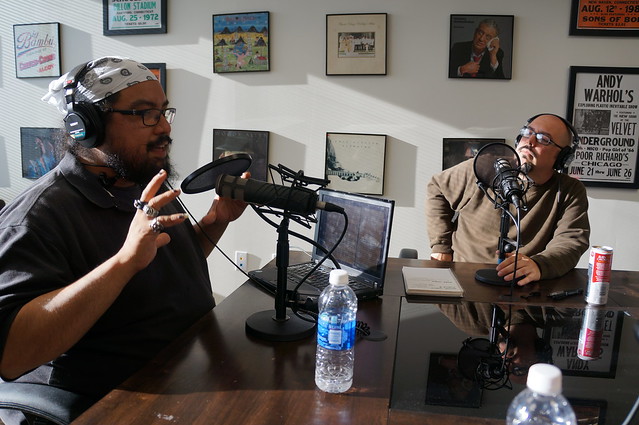 Our favorite people, Juan and Vito had Gizzy B and I on their podcast, with comic book writer, Mark Sable! Gizzy B had been on their podcast before but this was my first time. We had a lot of fun discussing some comic news and basking in the Mark Sable glory.

Check out a few more photos below the jump.

END_OF_DOCUMENT_TOKEN_TO_BE_REPLACED

In our geek loving community, we know (and love!) Sean Astin for his portrayal of Samwise Gamgee in the Lord of the Rings movie trilogy — or if we go more ‘old school’, we know him as Mikey from The Goonies! Sean is now rallying for our support for his online radio show, Vox Populi, where he hosts a forum for open discussion on politics, government and world events. His show welcomes every view point and encourages growth and learning as a community. Now, he is taking the show on the next phase with a Kickstarter campaign and he wants to reach his second goal within a few days to bring more content for the show.

Check out our interview with him below!

What has been the most inspiring aspect of your first season on Vox Populi for you and what are you hoping will continue on to the next season?

Truth be told, I’ve had the vision for this forum for so long, just getting to sit in the saddle and enjoy modeling an aggressively curious and always respectful tone. Hitting that note was enthralling for me.
END_OF_DOCUMENT_TOKEN_TO_BE_REPLACED

Discount tickets are available until Sunday, for $20 for a one-day badge OR! $45 for a weekend pass! These prices are for a limited time only so grab ’em now — click here!

Stan Lee’s Comikaze Expo is going back to the LA Convention Center and for the first time, the convention will be a three-day event from Friday, November 1, 2013 to Sunday, November 3, 2013. It’s going to be jam packed with awesome sauce and ONLY awesome sauce. No mayonnaise. Just awesome sauce. Keep up with them on their website for upcoming news and guests announcements.

Grab your tickets now before they are sold out! This is the Defective Geeks official most favorite comic convention ever!