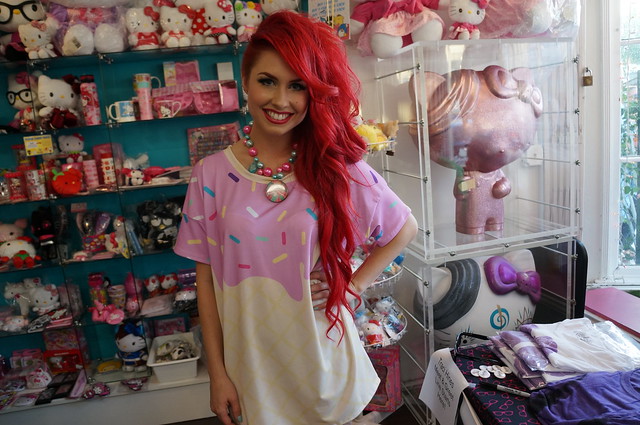 Japan LA, a store of all things adorable in Los Angeles, celebrated their 8th year anniversary. It’s been awhile since I’ve attended a Japan LA event, but they always will hold a special place in my kawaii heart. Hello Kitty was in attendance to take photos with guests as well as singer, Traci Hines and all-around-amazing-person, Jenny Rae.

Yes, much shopping was had on my part and customers who spent more than $30+ got a free gift bag as well. I managed to snag a bag of full of Rilakkuma goodies!

END_OF_DOCUMENT_TOKEN_TO_BE_REPLACED Rilakkuma (ãƒªãƒ©ãƒƒã‚¯ãƒžÂ Rirakkuma, a combination of the Japanese pronunciation ofÂ relax and the Japanese word forÂ bear)Â is aÂ JapaneseÂ character produced by theÂ San-X company. Rilakkuma debuted in 2003. Rilakkuma andÂ Tarepanda, another San-X character, have been described as “huge hits in Japan” byÂ The New York Times. Rilakkuma ranks as the fifth most popular character in Japan in the most recent survey of the Character Databank.
(taken from Wikipedia.com) Bubble Punch invited me to attend the Rilakkuma VIP party at Umami Burger in Los Feliz (California)– the kick off to the Rilakkuma weekend even that Japan LA hosted. Many familiar faces showed up for the party and I enjoyed the raspberry sake and delicious Umami burger sliders. Also had Lil’ Rae cakeballs for the first time and I am craving for more! San-X staff members were also present, including the next CEO of the San-X company– he gave an awesome speech, reading his English notes on a piece of paper. They helped with the raffle give-a-ways throughout the night, and three lucky winners walked away with big San-X plushies. Merchandise were displayed in glass cases, most were made available for purchase at Japan LA’s Rilakkuma pop up store.

Rilakkuma Weekend took place for both Saturday and Sunday at Melrose, with a pop-up store of rare San-X merchandise, food trucks, raffle prizes, and more! I spent most of Saturday at the store, hired to be the roaming photographer for half the day. Keep checking Japan LA’s website for the photos I took. It was a lot of fun to see people come in and get excited over the cute merchandise, or watch people get introduced to Rilakkuma for the first time! Personally, I am a big fan of Mamegoma! SO CUTE! Check out our slideshow of photos from the VIP party, or click here to go directly to our flickr gallery!