All of us geeks know a few things about comics and love to find a new diamond in the rough when the occasion presents itself. I’m fortunate enough to also have a fiancé who knows my taste in graphic novels and surprises me every few months with something new for me to obsess over. This was how I was introduced to the comic Irredeemable written by Mark Waid first drawn by Peter Krause and then taken over by father and son team Diego and Eduardo Barreto. I also became a HUGE fan of Brian K. Vaughn after reading Y:The Last Man and sought out the new on-going series Saga written by Brian K. Vaughn and artist Fiona Staples. Both titles have not disappointed.

Irredeemable just recently ended, but since I’ve been following it in trade paperbacks I’ve been behind on my reading, and I was only recently able to catch up with the story and devour it a week ago.

If you’ve read the comic you’re familiar with the premise of a once great superhero named Plutonian turned rogue and how everything goes to shit really quickly for everyone caught in his path of destruction.There are some similarities to the Superman origin story, BUT I don’t want to explain them to you because I feel it would be satisfying to discover how Plutonian came to be as a reader. If you haven’t read Irredeemable I promise to try and not spoil it for you, because I want you to READ IT!

There are quite a few titles out there covering similar themes of heroes gone to the Dark side, but I fell in love with Irredeemable because it’s not just about how good can turn into evil. Along with the parallel story of Max Damage, Plutonian’s nemesis, in Incorruptible it weaves in and out of the present situation our hero-gone-wrong and villain-for-good have found themselves in, and how they became the characters we are introduced to at the beginning of the series. The amazing cast of supporting characters displays how much other people play a role in their lives, without them (or the reader) realizing it. There is a HUGE reveal toward the end of the series that blew my mind about how Plutonian came to be and subsequently created Max Damage’s persona. Every volume I read with avarice and wishing I could jump into reading the single issues because I was so impatient. Luckily, I made it out alive and completely shell-shocked with the final outcome for all the characters involved in the aftermath of Plutonian’s final chapter. I cried a little as I read the final pages of  Volume 10. You can read Irredeemable without checking in on Incorruptible, however if you want the final story arc to make a little more sense when Max Damage comes along I’d recommend both. Granted, I love the artwork done for Irredeemable more than it’s counterpart, but that doesn’t detract from the story overall.  Luckily, I always have facial tissue on hand due to my horrible allergies.

On the flip side, and for those of you who love a good sci-fi action/love story you just might fall in love with Saga. The quirky writing of Brian K. Vaughn combined with the beautiful character designs by Fiona Staples make my heart skip a beat every time I gaze at the cover of a new issue. The story begins with our main characters Marko and Alana on the run as Alana is in the middle of giving birth to their love child. The story is sometimes narrated by their future daughter Hazel, with some foreshadowing commentary, and slowly introduces you to all the other major players who will capture your hearts and remind you that love isn’t always pretty, but it takes guts to make any kind of relationship work. Even is space. While being criminals on the run, in the middle of a galactic civil war doesn’t make things easier for either of the new parents. Their past and the present war make establishing a new family…a bit difficult.

Saga is one of the few comics I purchase single issues of because I am so enamored by the artwork created by Fiona. The first issues cover art featuring Alana breast feeding with Hazel in one arm and a gun in the other makes me want to jump for joy! Marko uses a sword (a freaking magical sword!!) to protect his family, but also has moral quandaries with committing acts of violence. I re-read the issue around 3-4 times just to revel in the character design, laugh at all the jokes, and relate to the idiotic fights between Marko and Alana and how they always manage to kiss and makeup. If you loved the comedic style of the TV series Firefly or the writing by Vaughn in Y:The Last Man I’m sure you’ll be a fan of the on-going series Saga.

I hope I haven’t given away too much of the story for either series (ask Giselle, I sometimes ruin stuff by accident). Both are dear to my heart and I never cease to recommend them to friends, family, or new acquaintances. One of my roommates and I ended up in an hour-long discussion about the moral conundrum Plutonian is caught struggling with and how he relates to the all-powerful Superman versus the mortal Batman. It was a very emotional discussion.

Thanks for reading, and feel free to tweet in my general direction about your favorite comic books. 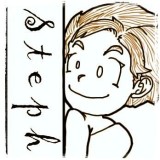 Comic Book: Stained Comic Book Nostalgia: The Archie Reboot In 2015, Archie will be “rebooted” with Mark Weid and one of my ... COMIC BOOK REVIEW: ‘All Crime’ and ‘Dames in the Atomic Age’ All Crime is a story about the frailty of friendship when up against the ...