More time traveling with Sandra! This week we visit The Lake House.

To quote IMDB summary, “A lonely doctor who once occupied an unusual lakeside home begins exchanging love letters with its former resident, a frustrated architect. They must try to unravel the mystery behind their extraordinary romance before it’s too late.” Except they don’t unravel the mystery, being the mystery is TIME TRAVEL and no one seems interested in that.

Lessons:
1) Time travel breaks my head
2) If you’re postbox turns into a tiny TARDIS, you won’t even think twice about it
3) Look both ways before crossing the street.

I’m going to discuss spoilers, so you’ve been warned!

This was a sweet film and I do like Sandra Bullock and Keanu Reeves together in films. Some how they have nice chemistry.

If you think too hard about this film, it will break your head. Firstly, no one seems phased at ALL by the fact that the mailbox is a TARDIS. They just roll with it like this is totally fine. WTF? I’d be trying to fit myself inside to see if I can travel through time with the letters. Come on, has no one in this universe seen Doctor Who? Or Back to the Future? If not, I’m glad I don’t live in that universe.

This is what the mailbox should have looked like: 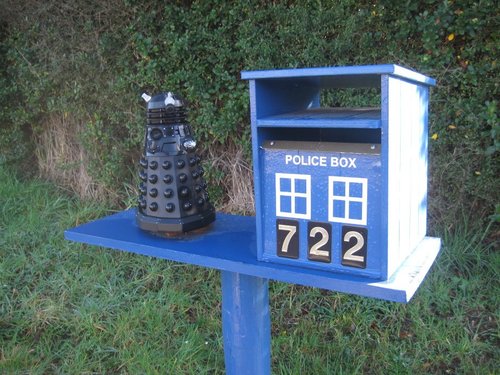 Secondly, I’m pretty sure this film is a paradox. The whole story’s catalyst is that Kate (Sandra Bullock) witnesses a man getting hit by a car and is the first doctor on the scene. She loses the patient and gets into a funk. So, on the advice of a colleague, she goes back to a place she was happy: The Lake House. She leaves a letter for the new tenant, and thus the letter writing starts.

However, this is where lesson 3 comes in. Look BOTH ways crossing the street. Seriously, or you will die and cause a paradox. Alex (Keanu Reeves) is the guy who dies in the street because he was crossing it to meet Kate, who he has been exchanging letters with in the TARDIS mailbox. But then she figures it out, writes him a letter saying “Don’t cross the street!” and he doesn’t, and doesn’t die. SO WHO DIES? We don’t know. Did someone die? Did the world implode? I don’t know!

A final comment: watching Keanu Reeves cry is awkward. Not in a sad kind of awkward, but in a Sheldon kind of awkward, where I would make him tea, uncomfortably pat his back and then exit the room rapidly.