This summer marked the return of Sailor Moon to tv, both across Japan, and internationally via streaming sites like Crunchy Roll and Hulu.

Growing up with Sailor Moon, plenty of us here at Defective Geeks, along with our friends from Skirts & Swords, could not resist doing a causual variant cosplay for Sailor Moon Day at Anime Expo.  So we got to brainstorming and decided it would be awesome to be Sailor Moon Cheerleaders.

The Cheerleader variant is one that we have never seen done. Sure, there’s sexy, rule 63, steampunk, bunnies… you name it! We’re not particularly new to the variation cosplay field, but it was exceptionally fun to do especially with a bunch of awesome geeky lady friends.
It was also a great and fun way to capture the fun and girly spirit of Sailor Moon.

If you put pom poms in anyone’s hands, regardless of gender, they will immediately somehow look more excited than usual. We saw this on many occasion over the weekend.

All of us work full time jobs or have multiple freelance gigs, so it really limited the amount of time each of us needed to spend on a costume. Some of our group members, like myself, had multiple costumes for the weekend, so having a casual but fun costume really helped.

Additionally, though many of our members have been cosplaying for years, but for the few who had never cosplayed before or didn’t feel like they could sew a full on seifuku, this cheerleader variant really helped in bringing the camaraderie and inclusiveness together.

Since the costume required a uniform look, all of us could focus on helping each other out withe hair, makeup, and posing.

It was actually a really good team effort. Sailor Moon would be proud.

So what else was great about this costume?
It was exceptionally affordable and as I said, required little to no sewing.

The cheerleading uniform shells we found online. Since the color of the Sailor Scouts is generally also carried in cheerleading uniforms, it made this really simple to just whittle down to some specific types of designs.
The only real sewing we had to do, was taking the uniforms in a bit, and adding the Scout names and symbols. However, those could just as easily have been glued on.

We customized the cheerleading uniforms by adding embroidered letters, and cutting out felt patches, each Sailor has her own planetary symbol. We tried our best to capture either the hair or accessories associated with each Sailor Scout to collectively and consistently reference each individual character.

We also made our own pom poms affordably out of plastic table covers from Party City!
This was a helpful DIY tutorial we based ours on (the video is not the best quality) http://youtu.be/p5ADMcARZ0g?list=UUC4kMbnYOowZzRznicH27-A
However, it is a very useful and easy way to make pom poms! We also added ribbon in the middle (of a contrasting color) which we could use as wristlets when we were tired of holding the pom poms.

Our Sailor Moon Cheerleaders were really warmly received by convention goers and during the VIZ Sailor Moon Fan Meet up. We couldn’t have been happier with how they turned out, and we will definitely be rocking these again in a few weeks for San Diego Comic Con with perhaps…. a bigger group! DUN DUN DUN!

See you in San Diego! 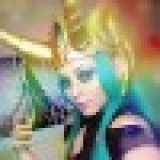