Spring is here, which means TONS more anime has popped up to distract us. If you are like me, you are still catching up on summer and fall anime, because there aren’t enough hours in the day, but that’s okay! We are in this together. \o\

Nōgēmu Nōraifu [No Game No Life] This anime was recommended to me as “someone who likes video games”. In the end I’m not entirely sold on it, but it’s only 12 episodes so I’m working on finishing it. There is a gaming element to it, but really the focus seems to be on the creepy relationship between a brother and sister, and how they had no life in the real world but were undefeated in games. They end up in an alternate universe where this skill has more meaning than just “winning a game”. There is excessive fan service, if panty shots and cat-girls are your kind of thing. They aren’t really mine, for the record.

This is an obvious satire of the magical girl anime featuring an all-male cast, and it is so on the far side of silly and ridiculous and yet on point. I love it. Please watch it. There is a pink wombat who possessing a dead man. No, seriously.

Sailor Moon Crystal
Duh. My inner child would riot if I weren’t watching this.

Orenchi no Furo Jijō [The Circumstances in My Home’s Bathtub] I really love the trend of more of shorter anime episodes. This anime is really ridiculous and based on a manga that seems a bit more complicated, but I don’t care, the fanservice is real. It’s about a dude who finds a merman and keeps him in his bathtub. Friends of the merman come to visit. The dude waits on the merman completely.  Many things are highly suggested and I’m okay with it. :3

What I’m Excited To Watch This Season. . .

Danna ga Nani wo Itteiru ka Wakaranai Ken [I Can’t Understand What My Husband Is Saying]
I watched the first season of this anime last year and really loved it. Again, it is one of those super short episodic shows, but the length is really perfect for the content. And as a geek myself, I appreciate both sides of this show – being a geek but also being married to one. ;) It’s cute and endearing and while that isn’t what I go for usually in anime, this still keeps my attention.

Shokugeki no Soma [Food Wars!]
Okay, if you must know anything about me, it is that I LOVE cooking shows, almost obsessively. So an anime about culinary stuff is just. So my unexpected jam. Nom nom nom.

Yes, I’m only adding two more anime to my list this season. My crunchyroll queue is actually quite crazy, with so many  anime I want to watch, but some I have put on the backburner in favor of others [for example, Devils and Realist is SO GOOD but I am trying to get through other ones first].

What are you watching right now? There are about 50 new shows this spring. Holy crap. It’s a lot to choose from! 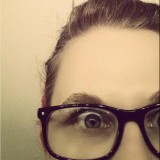