Sure, a game is a game, but if you’re dealing with the Final Fantasy franchise, why not make it a muti media experience that you can live and love through spinoff mini games, movies, anime, and music? Let’s do ALL THE THINGS!

So let’s see where this leaves our little fandom hearts, shall we?

1. Fans screamed with delight as Hironobu Sakaguchi walked onstage, the father of the Final Fantasy franchise. Although he has stopped working on the series as of FFIX, he made an appearance to give his comments and said he had high hopes for the new game, and believes, after speaking to current FFXV director Hajime Tabata, that the game has, “rediscovered its true nature.”

2. They released a new trailer, titled, “Reclaim Your Throne.” I seriously cried watching this thing. You can cry too with me and watch it here:

3. Yoshitaka Amano was there!! Look at his talented goddamn face. LOOK AT IT.

He created new art for FFXV which was rendered into a 3d image. There’s so much detail and love that went into the new logo for the game, that this is definitely a must see for any Amano fans.

4. The official theme song for FFXV is a re-orchestrated version produced and sung by Florence + the Machine. That was a surprise collaboration if I’ve ever seen one, but the song fits beautifully within the trailer. You can see her speak about the experience of making the music here:

5.  New game play footage was shown, featuring open world fighting, riding around on chocobos, and cruising around the world in your sweet convertible with your pals. The best part of the car? You can listen to songs from previous Final Fantasy games on its radio. YES. ALL THE YES.

6. The world building is BEYOND AMAZING in FFXV. With an incredible mix of both modern and classic fantasy, the game shows off their world full of everything from Route 66 Americana roads, modern cityscapes, and motels, to high fantasy Lothlorien-esque castles, glowing crystals in underground caverns, and a beautiful canal filled city clearly inspired by Venice. Did I mention that all of this changes from day to night throughout the game, with the sunlight and shadows moving from east to west? It’s truly breathtaking.

7. A 5 episode anime series titled “Brotherhood” tells the origin tale of the four main characters, is being released as of RIGHT NOW! The anime directly ties into the game, happening before and during the events of FFXV. You can peep the first episode here:

8 & 9. A feature length CG movie titled “Kingsglaive” will be released before the game, featuring an insane A-list voice actor roster which includes Sean Bean (Game of Thrones) as King Regis, Leda Headey (Game of Thrones) as Lunafreya, and Aaron Paul (Breaking Bad) as royal guardian/assassin Nyx. Oh yeah. BOTH LEDA AND AARON WERE AT THE EVENT onstage talking about their roles! Surprisingly, the crowd didn’t know who Leda was (you scum!) but they lost their minds of Aaron. Demographics, amirite?

Here’s the teaser for the movie!

THE QUEEN, Leda Headey speaking about her character.

Aaron Paul is excited to play a knife-wielding badass in the movie.

10. Square Enix and Audi teamed up to make a car which appears in the CG movie. I mean, the King Sean Bean Regis has to ride around in style somehow, right? They only made one though, so don’t get too excited about saving your pennies for this one.

11. A new mini game, because, of course, it’s Final Fantasy, and you have to pull your hair out over an impossible in-game thing, right? This new one is a pinball game called Justice Monsters Five, which is also available for download as an app game for your phone! The game releases later this year.

12. A totally free demo is available RIGHT NOW AND FOR FREE. Yup, those sneaky guys released “Platinum Demo” on Xbox One and PS4 during the event, and shows a young Noctis having Alice in Wonderland-esque adventures in Lucis Castle in a unique story not available in FFXV. There’s also an adorable fox who will join you in FFXV if you play through the demo! GET THAT CARBUNCLE because it is a cute patoot.

13. Of course there’s going to be Collector’s editions! Snap them up while you can, because the add ons are pretty amazing. In the Ultimate Collector’s edition, for example, you can get bonus in-game content! You can preorder these suckers right now if they’re still available!

14. The release date will be September 30, 2016. THANK THE BABY BAHUMUT IN THE SKY. Confetti rained down from the heavens as the official release was announced, and the crowd quickly jumped on their phones to pre-order all the things.

Thanks for sticking with us through that long update on the world of Final Fantasy!

Will you be playing this game this fall? Will you let it debilitate your social life like previous Final Fantasy games have done to us? Let us know in the comments! 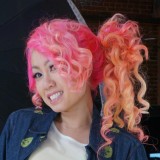