James Emmett, from 451 Media, joins us to discuss the minutiae of what happened with the Suicide Squad movie. Hear us both discuss how some of us loved it and some of us did not really love it. Mostly Giselle and Space Pirate Queen were not mad about Jared Leto’s douche Joker.

The Operator and Wing from the Comic Book Legends podcast joins the Lady Geeks tonight for an epic crossover podcast episode! We had fun discussion on comic books, how dreamy Stephen Amell is and what we want for presents during the holidays. Of course, we made them do Fanfic Theatre. 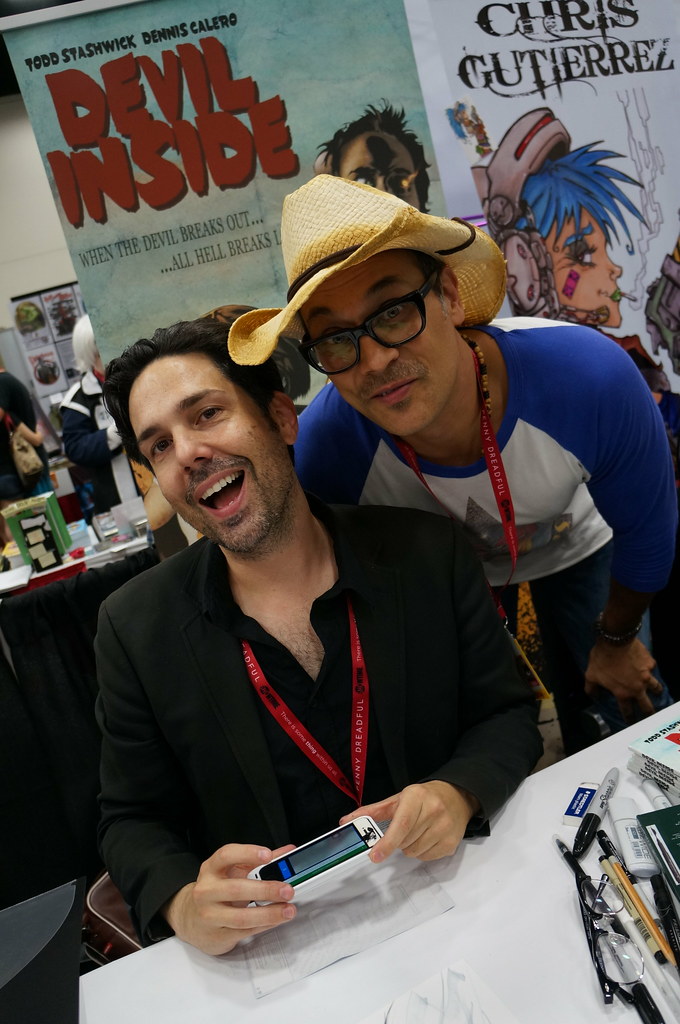 END_OF_DOCUMENT_TOKEN_TO_BE_REPLACED

Ep. 81 All The Nightmares

On another Halloween themed episode, the Lady Geeks delve into their childhood and talk about their worst nightmares – cannibals, rubber ducks, the Joker, white noises, mental asylums and more. Don’t worry, we still get a little silly though this episode is slightly creepy! END_OF_DOCUMENT_TOKEN_TO_BE_REPLACED

Batman fans may remember back in 2007 when the viral campaign for The Dark Knight started. There were campaign sites for Harvey Dent, and many times there were opportunities for fans to get involved, like going to instructed areas to support Harvey Dent (as seen in this Gotham Cable News website) or following directions given by the cryptic site WhySoSerious.com and after completing the task the fans were rewarded with new pictures of characters, sound bites, and other clues to what the movie would have in store for us.

The first full body picture of the Joker, revealed after fans completed assigned tasks from the site WhySoSerious.com

I can say with complete honesty that I had never had so much fun anticipating a movie in my entire life. The viral campaign was a wonderful interactive experience and many times let us into the minds of the characters from the upcoming film. I’ll never forget getting a phone call from 000-000-0000, but then once I answered I realized it was a phone call that was happening during one of the Joker’s bank robberies. The whole experience put a huge smile on my face (something I’m sure the Joker would approve of). A list of all of TDK viral sites.

Now it’s happening all over again. For months fans were wondering when the viral campaign would start for The Dark Knight Rises, and a couple of weeks ago it finally did. It started with the official site. If you go there you hear this cryptic chanting, but no images. One of the fans, God bless them, put the sound file through an audio visualizing program and what came up was a hashtag: #TheFireRises. Using this hashtag revealed a mysterious twitter account by the same name. After enough tweets it finally revealed the first official picture from The Dark Knight Rises.

The picture released of Bane after fans tweeted #TheFireRises

Now there is a channel on YouTube with the same username that’s releasing vague videos alluding to an escape from Arkham Asylum. There is debate as to whether or not the channel is legit or simply the makings of a zealous fan, but either way I recommend checking it out because the videos are neatly crafted.

I am excited to see what the rest of the viral campaign has in store for us. If you didn’t have a chance to be involved with TDK viral campaign (and if you’re a creepy obsessive fan like myself) then you really ought to keep an eye out for this one. The people in charge of the campaign make being a dedicated fan a very rewarding experience. Since this is the last Batman movie that Christopher Nolan is directing I’m going to make sure to enjoy this to the fullest capacity. Even though my anticipation for this movie is borderline psychotic, I’m going to appreciate this time of waiting and enjoy it while it lasts.

So for now, kids, let’s sit back and see how this viral campaign unfolds. I’m sure, no matter what, it’s going to be a great ride.

The Lady DefectiveGeekers bashes on horrid movie posters, goes into depth about Bella x The Joker fanfiction, fandom drama and their girl crushes (creepily, of course!).